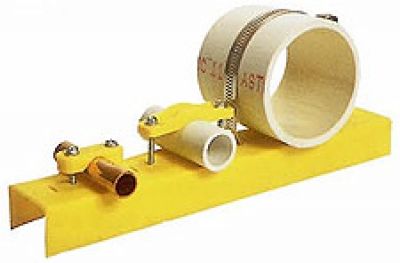 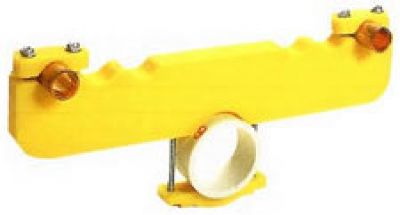 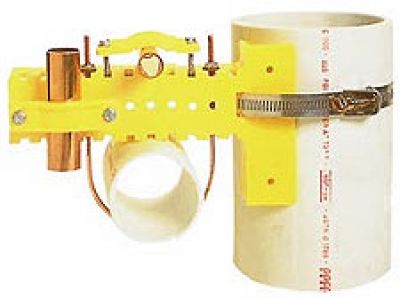 Channel comes in 7-foot lengths and is sized to fit over the strut as an isolator. The Channel fits as well over the Stakfix to be used as an extension; or with two Stakfix mounted opposite each other it can be used as a bridge. It may be fastened to cement walls to support pipe running either vertically or horizontally, or it can be fastened to studs for supporting shower head piping or other applications. It can be used as well as a strut for suppo Pipe Support AccessoriesAccessories for the Pipe Supports include Plastic Clamps, Metal Clips, Mounting Screws, Steel Bands, and U-Bolts.
rting small diameter overhead piping.


Similar to Posifix, the Pipefix can be used in lavatory rough-ins. The Pipefix application is similar to the Posifix in that it holds and aligns 1/2" and 3/4" supply lines with waste pipe, particularly in tight applications. Only 3-1/2" of wall clearance is required to mount the Pipefix. The support is pre-slotted to hold supply piping 4", 6", or 8" apart. The Pipefix attaches to 1-3/8" through 6-5/8" O.D. vent or waste piping by means of The Posifix is the smallest support particularly designed to fit between studs. Its application is to align and support hot and cold lines with waste piping in a lavatory or sink rough-in. The Posifix is pre-slotted to hold 1/2" or 3/4" supply pipe 4", 6" or 8" apart. The unit mounts on 1" through 1-1/2" waste pipe for perfect alignment.
The Stakfix is used strictly inside of the chase and attaches to 1-3/8" - 6-5/8" O.D. pipe vents or stacks by means of a stainless steel band similar to the Pipefix. The Stakfix has three mounting surfaces for supporting for supporting a combination of piping up to 1-1/2", running vertically and/or horizontally. The Stakfix also can be strapped onto metal struts or nailed to wood. Two to three-inch pipe can be supported on the Stakfix by using the U-bolts The P-551 U-bolt is copper plated to prevent electrolysis. Smaller pipe can be mounted on the Stakfix, as well as using both syles of clamps.